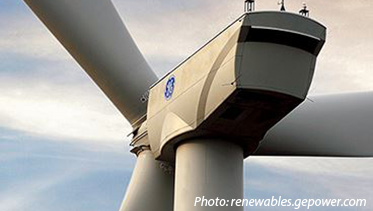 General Electric said it plans to increase its wind power output in Turkey by supplying a new version of smart wind turbines with enhanced generation capacities. With the new project, it will boost its installed wind capacity in the country to over 1 GW, the press release says, according to a report by Anadolu Agency’s Energy Terminal. Turkey’s current installed wind capacity is 4.72 GW.

GE will deliver 31 wind turbines with the latest technology to be utilized in the Dinar wind power plant located in the western city of Afyonkarahisar and owned by Güriş, company involved in construction, industry, energy and mining sectors. The units, each equipped with 120 metre blades, will raise Dinar plant’s generation capacity to 200 MW from 115 MW. With advanced features such as low sound emissions, control of power management and an efficient electricity transformer, the wind turbines can generate more energy, the company argues.

In accord with the agreement, GE will undertake the operation and maintenance of the plant for five years once it becomes commercially operational in December.