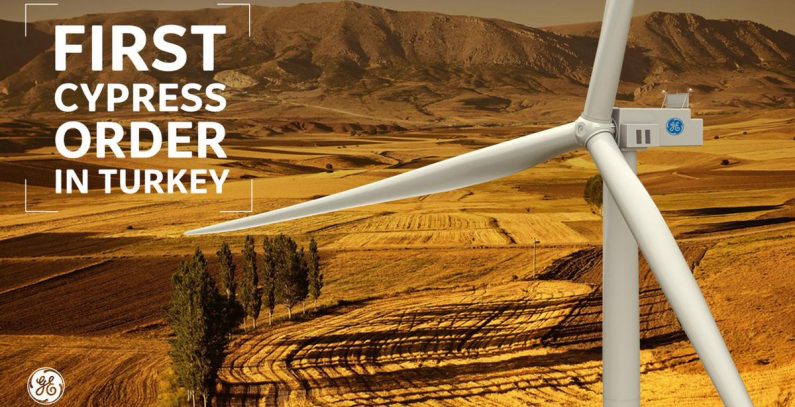 GE Renewable Energy, which already has an over 1,200 MW installed base in Turkey, has agreed two more major deals to supply wind turbines and other equipment in the country, for a 158 MW project and a 138 MW project, according to press releases from the company.

The first project in Turkey that GE Renewable Energy announced earlier this month concerns the first order in Turkey for GE’s Cypress platform, the company’s largest onshore wind turbine in the field.

GE Renewable Energy has been selected by Borusan EnBW Enerji to provide 27 Cypress units for the 138 MW Saros project, enough to power the equivalent of 190,000 homes in Turkey. Borusan will operate the Cypress turbines at 5.X MW, with a rotor diameter of 158m.

GE’s scope of work will also include 10 years services agreements.

The Cypress’ two-pieces blade will be produced by GE’s wind turbine blade manufacturer, LM Wind Power at its site in Bergama, Izmir, Turkey. The company recently decided to invest another USD 30 million by the end of 2019 to expand its facility and recruit 300 new employees. Towers for the wind turbines will also be produced in Turkey.

The Saros wind farm, to be built under a USD 190 million investment, will have an installed capacity of 138 MW and an annual production of 530 GWh, said Mehmet Acarla, General Manager Borusan EnBW Enerji, adding 297,000 tons of carbon emissions will be prevented.

Under the second project, GE Renewable Energy has been selected by Türkerler and RT Enerji to supply equipment for the Kirazli, Meryem, Sile, Pamukova, and Mahmut Sevket onshore wind farms.

Forty-nine of GE’s 3 MW onshore wind turbines will be installed in Izmir, Bilecik, Sakarya and Istanbul Turkey. With a total capacity of 158 MW, the project will provide renewable energy to the region, powering the equivalent of 183,000 homes. The scope also includes a 10-year servicing agreement.

As a part of the agreement, LM Wind Power will produce the 147 blades for the wind turbines at the Bergama site, Izmir, Turkey, where GE has more than 450 employees. Towers and generators will also be produced in the country.

Dear Sirs
It will highly appreciated if introduce me the name of some companies in Turkey which they can produce hub casting for 2.5 & 3 MW Wind turbines .
Best regards
Bahari