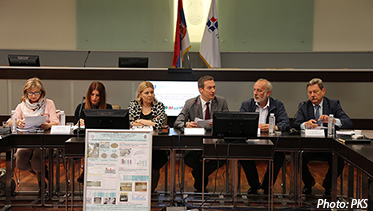 There is a hidden resource for new industrialization. Participants at a round table at the Chamber of Commerce and Industry of Serbia (PKS) said 80% of construction waste can be reused in building, mostly in civil engineering. Experts, professionals and representatives of responsible ministries, associations and institutions agree recycling of the material would affect the country’s economic growth positively and that the labour market would benefit, however that the area needs systemic regulation.

Viktor Kobjerski, head of the chamber’s civil engineering association, said thousands of tonnes of construction waste are all around in unregulated landfills. Uncontrolled spreading brings issues in relation to the integration with the European Union, including large fines, he said and reminded Croatia and Greece have penalties because landfills are degraded and covered with earth and construction waste, blocking the way to reusable material from municipal waste.

All contractors should be obligated to transport waste to an official landfill assigned to the local authority, so that the state could cover all the costs for recycling and to sell the material, Kobjerski stressed. He added the chaos emerged because there are no companies which would sort the material, unlike in the times of Yugoslavia.

Aleksandra Damjanović, state secretary in the Ministry of Construction, Transport and Infrastructure, said the institution is supporting the initiative to regulate the area with efficient and applicable by-laws. The related law has only one paragraph mentioning construction waste, where it is stipulated it must be dealt with under particular regulations, she added. Construction waste is “gold and a new possibility for Serbia, for job creation but also for environmental protection,” Damjanović stated. In her words, Croatia, an EU member, generates two million tonnes a year, while only 5% is recycled. The state secretary noted the Netherlands and Denmark are positive examples. Special tax for construction waste introduced in Denmark in 1984 enabled measures to deal with the problem, driving the recycling rate from 11% to 90%, registered in 2004.