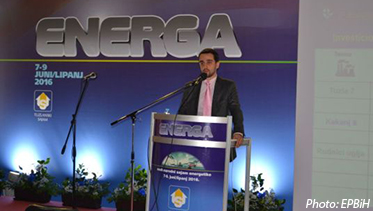 Senad Salkić, chief capital investment officer of state-owned Elektroprivreda Bosne i Hercegovine d. d. (Electric Utility of Bosnia and Herzegovina – EPBiH), participated at a conference on the strategic approach to investing in the country’s energy sector during the Energa international energy fair, held from June 7 to June 9 in Tuzla.

EPBiH also plans more projects that are still in the stage of preparing documentation and licensing – hydro facilities Una Kostela-Aneks, Vlašić, Kovanići and Babino Selo, as well as endeavours that are in the development stage – block 8 at thermoelectric power plant Kakanj, wind parks Vlašić and Bitovnja, hydropower systems Ustikolina and Gornja Neretva, the heating systems for thermoelectric power plants Tuzla – Živnice and Kakanj – Sarajevo, and the reduction of greenhouse gas emissions at thermal power plants Tuzla and Kakanj.