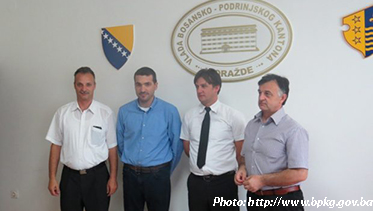 Prime minister of Bosnian-Podrinje Canton Goražde Emir Oković signed a concession contract with Mensud Pekmez, director of company EKO-REM from Sarajevo for the construction of mini hydropower plant Jabuka on the river Kolina near Ustikolina.

The contract foresees exploitation in the next 30 years and the construction of a power plant with 700 kW in capacity and annual production of 3.1 GWh.

Total investment value is estimated at BAM 2.3 million (EUR 1.2 million). According to the announcement on the regional government’s website, electricity generated in this facility will fully meet all the needs of the local population at Jabuka, as well as part of the needs in the canton. Thanks to the contract, the cantonal budget will receive BAM 42,000 (EUR 21,500) as a one-time fee, and citizens of the municipality of Foča in the Federation of Bosnia and Herzegovina and environmental associations will also have the benefit, the article said. The federation is one of two entities making up BiH.

Local firms will be hired on the construction of the mini hydropower plant, which should be completed in October. According to announcements, the investment will enhance energy stability and new employment is also planned.

So far, EKO-REM has implemented several projects in the eastern Bosnian region, including the construction of a mini hydropower plant on the river Kosovo. Oković said the government is satisfied with the fulfillment of obligations from the previous contract.