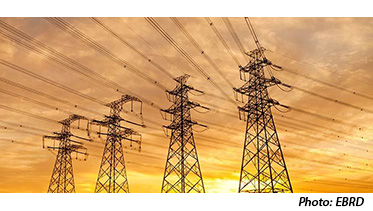 The European Bank for Reconstruction and Development is boosting the regional integration of energy markets in the Western Balkans. The institution said it is providing a loan of up to EUR 37 million for the construction of the first electricity interconnector between Albania and Macedonia and the introduction of grid efficiency improvements to the infrastructure of MEPSO, the Macedonian electricity transmission system operator.

This project is part of the European Commission’s initiative to establish an East-West electricity transmission corridor between Bulgaria, Macedonia, Albania, Montenegro and Italy, including the planned submarine cable from Montenegro to Italy, an important step towards establishing a regional electricity market. The grid efficiency components implemented by MEPSO will also ensure that the transmission of electricity is energy efficient and uses the best available technologies, according to the arrangement.

“Supporting crucial regional cross-border infrastructure and creating larger integrated energy markets increases energy security. It is also one of the EBRD’s priorities in the energy sector of the Western Balkans”, said the report on the bank’s website.

A loan is provided to Macedonian Transmission System Operator AD (MEPSO), a joint stock company responsible for electricity transmission and power control in the country. The financing will support the construction of the Macedonian portion of the planned 400 kV cross-border electricity connection. It will be used to build the transmission infrastructure from the southwestern Macedonian town of Bitola to the Albanian border with a substation at Ohrid, and to implement grid efficiency components. In addition, MEPSO will use the newly developed EBRD Client e-Procurement Platform (Ecepp) for the procurement of contracts to increase the transparency and efficiency of its operations, the statement said.

The project has received technical assistance from the Western Balkans Investment Framework (WBIF) to fund the feasibility study, the environmental and social impact assessment and preparation for the main design of the project. Separately, the EU is also co-financing the new project with a EUR 12 million grant provided under the WBIF Instrument for Pre-Accession (IPA) 2015 funds. In addition, Luxembourg is providing funds to for technical assistance in MEPSO.

“With the construction of this transmission line, both Macedonian and Albanian electrical power markets will benefit considerably. I am pleased to have such fruitful cooperation with the EBRD and its continued support for the development of the Macedonian power sector and the realisation of energy infrastructure projects,” said Bekim Neziri, Macedonia’s minister of economy.

“Energy is a strategic sector in every country, vital for all aspects of people’s daily life and for the development of all other sectors of the economy. The EU is providing substantial support for this sector through the IPA programme and also through the Western Balkans Investment Framework, which means provision of finance and technical assistance for strategic investments,” added Aivo Orav, head of the Delegation of the European Union in Macedonia.

“We are pleased to continue our successful cooperation with the EBRD. Through this new regional project, MEPSO is connecting Western Balkans countries and improving electrical supply in the region,” emphasised Siniša Spasov, general manager and president of the Management Board of MEPSO.

EBRD said it began investing in the Macedonian economy in 1993. To date, it has signed over 90 projects in the country with a net cumulative business volume of more than EUR 1.5 billion, according to the report.

READ NEXT: Biomass should be supported by procurement rules
Home » News » EBRD linking Albanian and Macedonian energy markets to EU