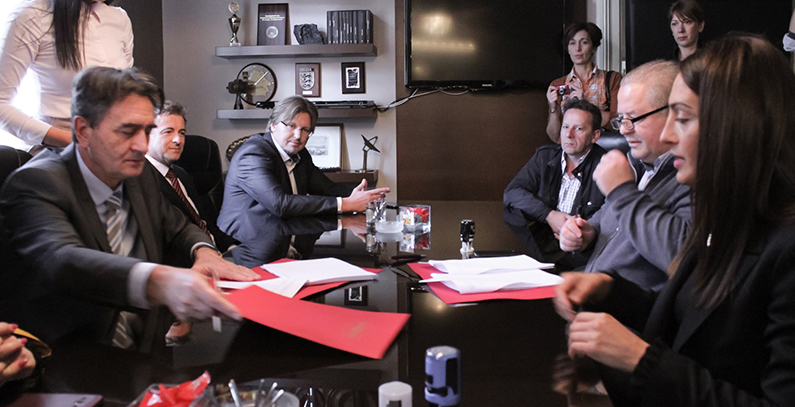 The City of Kruševac, in central Serbia, has signed a public-private partnership (PPP) with GGE, regional energy services group, for a complete renovation of public lighting systems in its administrative area. This is the largest public lighting PPP in the Balkans by number of light bulbs and luminaires to be replaced, and the largest energy efficiency PPP in Serbia to date, GGE said.

The PPP agreement was signed on September 21 by Dragi Nestorović, Mayor of Kruševac, and GGE and its technical partner Elios. The project provides measures for the replacement of 12,545 old inefficient luminaires with 12,545 Phillips and Schreder LED luminaires.  The public lighting systems will be renovated in 99 of the towns and settlements within Kruševac administrative area.

In the case of Kruševac, the bulbs were carefully selected following photometric measurements to fill all the requirements of the city and its surrounding settlments. Switching to LED will reduce the total wattage of installed light from 1,664 kW to 356 kW, which will result in financial savings of 85 percent for the City of Kruševac once the private partner is paid off.

The contract duration is set at 13 years, but GGE will provide guarantees for the equipment installed for an additional 2 years.

GGE will also replace the obsolete systems for switching public lighting on and off in all 330 substations in the municipality. The new system will be automated and regulated by an astronomic clock adjusted for the conditions in Kruševac, enabling optimal energy savings as well as the required 4,000 operating hours per year.

Both GGE representatives and Kruševac officials concluded that PPP model provides an efficient solution for municipalities to ensure infrastructure modernization.

“The most important message that this project sends is that this has all been achieved without any spending from the city budget, and that after the repayment of the investment to the private partner and covering electricity costs, the city budget will retain more money than before the reconstruction,” Ankica Barbulov, director of GGE for Serbia, said.

“Kruševac is a great example of how each of our municipalities in its obsolete lighting systems is hiding a huge potential for new investments and that there is no excuse to continue wasting unnecessary amounts of energy. The lack of funds in the budget is no longer an obstacle because investments are repaid from the savings created by new LED technology, and there are private partners interested in such investments,” she added.

The local government said that Kruševac is yet another Serbian municipality that has recognized the importance of public lighting reconstruction through the PPP model, adding that the savings in 15-year period would amount to EUR 1,6 million.

They also said in a statement that this project will show that not only smaller municipalities are interested in such PPP projects, but also larger cities.

The PPP model allows private companies to invest in public projects, according to a specific contract by which the private partners provide financing, carry out all the works needed and ensure maintenance of the equipment, taking on all responsibility for the project, while the public partner pays back the investment from its savings over time.

GGE has already carried out public lighting projects in Serbia in the municipalities of Ada, Žabalj and Petrovac na Mlavi. In the city of Pirot, GGE will replace fuel oil boilers in four elementary schools with biomass boilers and provide heat energy to the schools in the first PPP for heat energy supply in Serbia.

GGE is also a private partner in the largest energy efficiency PPP in Slovenia with the City of Ljubljana, for the energy retrofit of 49 public buildings.