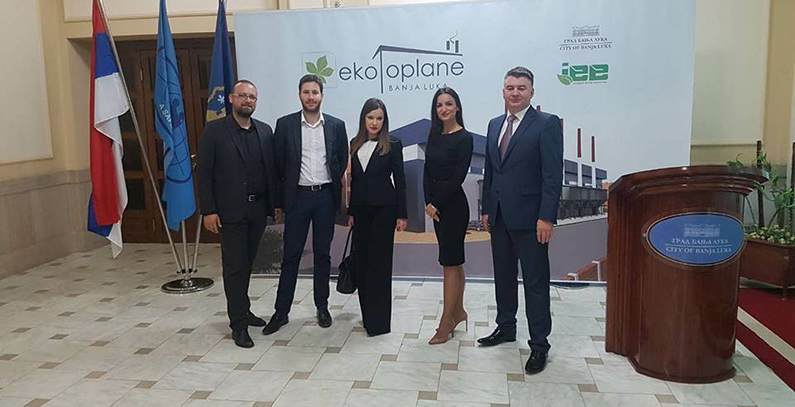 The Banjaluka city government initiated the process of construction of a biomass-powered central heating plant and upgrades to the existing heating pipelines. The contract to set up the Eko Toplane Banjaluka joint-venture company was signed with the IEE Group company as investor.

The start of construction is planned for June 1 on a plot of land right next to the existing heating plant. Mayor Igor Radojičić said at the signing ceremony that the city will now get 24-hour heating with huge savings.

The city’s existing heating plant will be restructured and part of its employees will get jobs with the Eko Toplane company. The Banjaluka city authorities and the Republika Srpska government assessed that the construction of biomass powered heating plan will mean savings of millions of Euro in heating oil costs for the old plant.

The technology for the new plant is the product of local experts and that will get the machine and construction industries moving in Republika Srpska, said Institute for Energy and Ecology Executive Director Dragiša Zečević.

Šuma Srpske state-owned forestry company CEO Risto Marić said that sufficient amounts of biomass and wood chip will be secured for the needs of the new plant.

IEE company spokespeople said the new biomass powered plant will have 49 MW of power, adding that the company will manage the plant and the procurement and preparation of wood chip and biomass. The IEE company built a biomass powered heating plant in the town of Gradiška winning an award from the European Bank for Reconstruction and Development in 2015 and an award for the most successful project in at a 2016 international forum on clean energy technology.

The new heating plant in Banjaluka will be a long-term sustainable and stable system, IEE spokespeople said.

Initial assessments are that the construction of the new biomass plant and upgrades to the existing central heating system in Banjaluka will mean a reduction of around 80,000 tons of CO2 emissions a year.

This has been a huge fail on behalf of the city which used private money to invest in this while covering the money laundry scheme. Also they are calling it eco heating plant, but it couldnt be further from the truth. They have been cutting forest and trees to supply material for burning.

Because Banja Luka doesnt have a system of collecting bio mass from its citizens, therefore they have been burning trees for the last two years. Proof is in their courtyard where hundred of freshly cut trees have been piling up during the autumn.
Also they dont have the filters so we are suffocating in smoke from this ‘ego thermal plant’.

I suggest you actually research this before promoting as sustainable.

We know the truth and we are pissed.