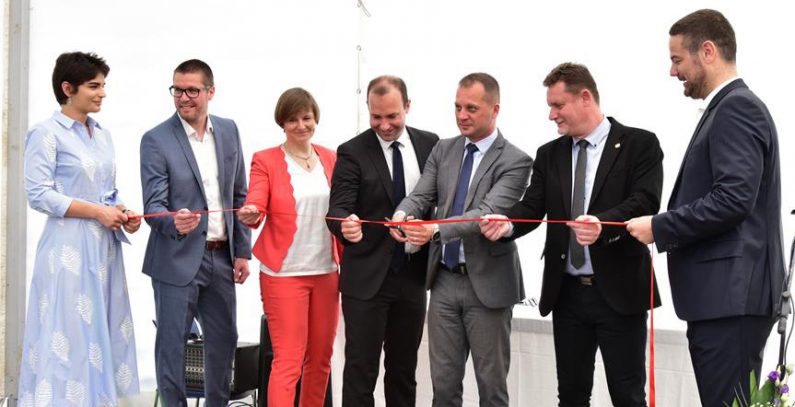 Resalta, the energy efficiency and renewable energy company, marked the opening of the Slatina biomass cogeneration plant in Croatia this week. The 5 MWe plant is one of the major renewable energy projects in that part of the country and produces enough electricity to power 500 households, according to a press release from Resalta.

Resalta, formerly GGE, is a company based in Ljubljana, Slovenia present in eight countries across the region. Its activity is divided into energy efficiency projects and large scale renewable energy projects such as the combined heat and power plant in Slatina, Resalta’s first such project in Croatia.

EUR 24 million was invested in the cogeneration. Construction works began in September 2017 and the plant was put into operation at the end of 2018. The steam boiler plant, which uses biomass (wood pellets) as fuel, with a steam turbine and a generator, produces electrical and thermal energy. The dryer within the plant is used for drying biomass and thus maximizes the efficiency of the cogeneration plant.

The electric capacity is 5 MW, while the heat capacity reaches 12 MW, meaning that the plant produces 40 GWh of electricity annually and 96 GWh of thermal energy. The manufacturer of the boiler is a Croatian company Đuro Đaković TEP from Slavonski Brod. The Croatian Electricity Market Operator (HROTE) signed a 14-year contract for the purchase of electricity produced by the plant.

The newly built cogeneration plant employs 13 workers from the territory of Slatina.

The plant was officially opened by the mayor of Virovitica-Podravina county, Igor Andrović, and Denis Ostrošić, mayor of the City of Slatina.

“The Slatina project has the best available technology equipment with the highest level of energy efficiency and the lowest greenhouse gas emissions. Resalta, as the leader in ESCO services in Southeast Europe, is planning more and more to invest in biomass and renewable energy plants. This is a natural step for our company, which is fully oriented towards energy saving and investment in clean energy projects. We are very proud of the cooperation with the Municipality of Slatina and the County, and the support they have provided to this project, as well as the excellent cooperation with Đuro Đaković, who together enabled us to build such a facility in Croatia,” said Marko Podlesek, Resalta’s director of renewables.

Resalta provides turnkey solutions to private and public sector clients following the ESCO model: for each energy efficiency project, Resalta offers a full service from energy audits to design, implementation, maintenance and financing. Clients repay Resalta’s investment from realized savings, and Resalta takes on all project risks, technological as well as financial, according to the press release.

Resalta has successfully carried out over 180 projects for over 120 different clients, including the City of Ljubljana, Gorenje, Atlantic Grupa, Mercator, and the City of Novigrad. In addition to energy efficiency projects, Resalta also develops renewable energy projects such as biomass plants and photovoltaics.