Six Croatian households get acces to electricity with solar panels

Picture: Solar panels on the house of Mara Stanić from the village of Čakale (Green Action/FoE Croatia) 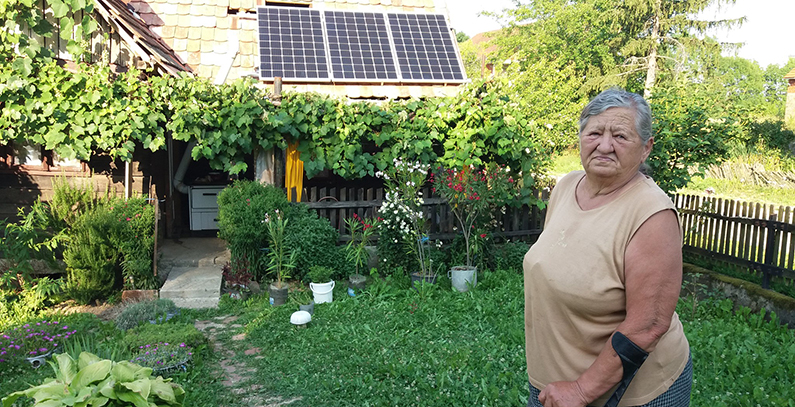 Six rural households in Croatia can finally replace candles with light bulbs, keep food in a refrigerator, watch TV and listen to the radio, after spending ten or more years without power. They get electricity from solar panels on their roofs.

The Ray of Sun – Light of Hope campaign, organized and implemented by Zelena akcija / Friends of the Earth Croatia (FoE Croatia), together with the People for People initiative, is an outstanding example of humanitarian action and demonstration of the benefits of renewable energy sources.

789 million people in the world do not have electricity

It is difficult to imagine life without electricity today, but unfortunately there are still a lot of people who do not have access to power. At the global level, the number was 789 million at the end of 2018. The International Energy Agency has said if some new measures are not introduced, the number would decrease to 620 million by 2030, and then rise to 740 million by 2050.

Although most people without electricity live in Africa and Asia, there are also such cases in the region. The Ray of Sun – Light of Hope campaign showed things can change quickly with the help of good people and renewable energy.

The six households have not only received access to electricity, but thanks to solar panels they have advanced two steps further, compared to most households in Croatia – they have become energy independent and prosumers – producers and consumers of green energy.

Six households didn’t only get access to electricity, but became energy independent and prosumers of green energy

The money to bring electricity to the six households was provided through a crowdfunding campaign, which began in February. In just a month and a half, about 500 people donated EUR 13,570.

Representatives of Zelena akcija or Green Action told Balkan Green Energy News that together with the People for People initiative, which has been helping people in the county for a long time, they have identified five households that have not had access to electricity for a long time, some for ten years or more. These are older residents but also younger ones. As the crowdfunding campaign raised more than planned, a sixth rooftop PV plant was purchased.

Zelena akcija / FoE Croatia is immensely happy and grateful to all those who supported our humanitarian campaign, said Marija Mileta, its Climate Change Programme Assistant and Communications Coordinator.

According to her, this is the organization’s first action of this kind and it was selected as a way to celebrate its 30th anniversary.

Apart from helping people in need and trying to change their lives for the better, Zelena akcija also wanted to highlight the energy poverty issue in Croatia and show that solar energy is one of the key solutions to the problem and the climate crisis, Mileta said.

She noted Croatia is among the 17 EU member states that have the highest level of energy poverty, the lack of access to modern forms of energy, such as electricity, or the inability to meet the cost of energy necessary for living in acceptable conditions.

Unfortunately, there are many more households without electricity, so Zelena akcija / FoE Croatia believes the Government of the Republic of Croatia must seriously address the issue, and one of the solutions is to invest in renewable energy sources and energy efficiency measures, she said.