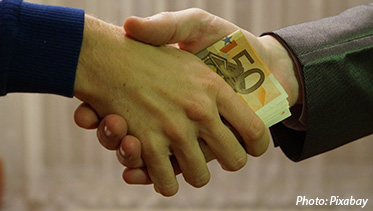 Cyprus attorney general Costas Clerides ordered European arrest warrants to be issued for construction mogul Leonidas Bobolas and businessman Theofanis Lolos, both from Greece, for suspected involvement in embezzlement in waste management in Marathounda and Koshi. According to Socrates Hasikos, interior minister of Cyprus, the state can officially terminate the contract with Greek company Helector for the Koshi landfill in Larnaca, Cyprus Mail reported.

A local warrant was issued earlier against Bobolas and Lolos along with Paphos Sewerage Board director Eftichios Malekkides, currently serving a six-year jail term for his involvement in a separate bribery scandal. Lolos’s role is being investigated as he was the director of Enviroplant, assigned by the interior ministry to oversee waste management in both projects. The latest warrants were issued after the thirteenth suspect, Helector’s chief executive Athanasios Katris, arrived in Cyprus and was arrested last week, the Cypriot daily noted.

A total of 19 warrants have been issued in the scandal in which Greek company Helector, responsible for the construction and operation of the waste management plants, is thought to have bribed various officials with over EUR 1.16 million to overcharge municipalities for years.

High-profile arrests include Larnaca mayor Andreas Louroudziatis and former Paphos mayor Savvas Vergas, also serving a six-year sentence for the role in the separate case, the article adds. Helector is a subsidiary of Ellactor, Greek construction giant owned and run by Bobolas family.