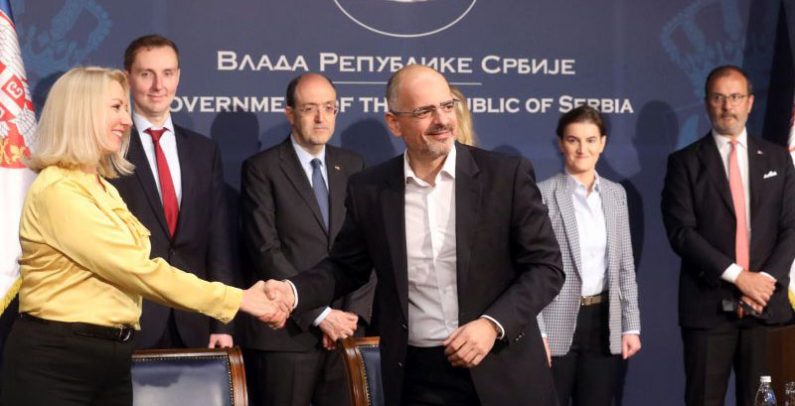 An agreement on eight EU member states’ EUR 10 million donation for a EUR 80 million project to improve water supply and sewers systems in 25 municipalities in Serbia has been signed in Belgrade today. The donation is being channeled through the European Investment Bank (EIB).

The agreement on the EU countries’ donation for the development of water supply and sewers systems in Serbia was signed by EIB Country Manager for Serbia Anna Solecki and Director of Public Investment Management Office Director Marko Blagojević, according to press releases from the Government of Serbia and the EIB.

Water supply is a huge problem in almost all municipalities in Serbia, with the network experiencing major losses, said Serbian Prime Minister Ana Brnabić, noting that the losses are at 65% in Smederevska Palanka and over 70% in certain municipalities.

The EIB is providing EUR 50 million for the project, including the EUR 10 million grant and a EUR 40 million loan that the Serbian parliament ratified in May.

The project concerns the quality of life given that part of the water supply system contains asbestos-cement pipes that were used in the 1960s, Brnabić said.

According to her, the improvement of the system will lead to a better model for local public utilities’ operations.

She noted that of the eight EU member states, Italy and Poland are the single biggest donors and that today’s agreement underlines why it is important for Serbia to join the EU.

According to her, talks are also under way with the World Bank on a EUR 200 million loan for projects to improve water supply and wastewater treatment systems.

For his part, Blagojević said that the EUR 50 million will finance projects in the first 25 municipalities to prepare the necessary documentation.

According to the EIB’s press release, the overall project is worth EUR 80 million of which EUR 10 million is the donation and EUR 40 million the loan from the EIB, while the remainder will be provided by the state and municipal budgets. Serbian partners from local municipalities will contribute to the project by developing relevant project documentation. The implementation of projects is planned between 2019 and 2024.

Head of the EU Delegation to Serbia Sem Fabrizi said that water quality and supply are of vital importance and a key element along Serbia’s path to the EU and achieving a range of environmental standards.

The EIB’s Regional Head of Office for the Western Balkans Dubravka Nègre noted that the recent weather disasters in Serbia and Belgrade serve as a reminder of how important it is to have a sustainable and resilient system and adequately developed water supply and sewers systems.

The EIB estimates that the implementation of the projects will improve the quality of lives of more than 600,000 Serbian citizens, she said.