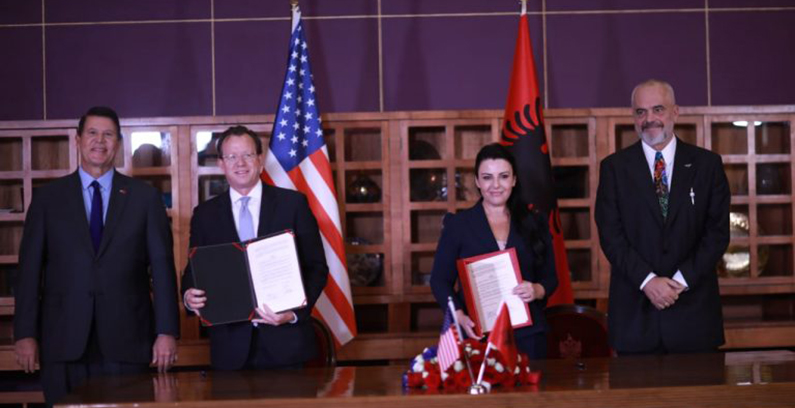 US construction company Bechtel and Albania’s Ministry of Infrastructure and Energy will jointly prepare an action plan for the implementation of the Skavica hydropower plant project. The planned installed capacity of the HPP is 210 MW while investment is estimated in the range of EUR 308 million to EUR 510 million.

The action plan is one of the activities envisaged under the memorandum of understanding for cooperation regarding HPP Skavica signed by the ministry and Bechtel, the ministry said on its website.

The action plans will also include the current status of the technical documentation, the activity plan, the financing models and deadlines

The document will also include the current status of the project’s technical documentation, activity plan, proposed financing models and implementation deadlines.

The MoU was signed by the Minister of Infrastructure and Energy Belinda Balluku and the representative of Bechtel, Justin Siberell in in the presence of the Prime Minister Edi Rama and the US Under Secretary for Economic Growth, Energy and the Environment Keith Krach. It followed the signing of the Memorandum of Understanding on Economic Cooperation between Albania and the United States. It was signed by the Krach and Minister of Finance and Economy Anila Denaj.

In June, the Albanian government presented two scenarios for the construction of HPP Skavica. Minister Belinda Balluku said the government planned to use own funds for the unit and that the works are expected to start next year, after an international tender, to be launched in October.

Support of the US government

After the signing of the MoU with Bechtel, the ministry said the government secured the support of the US government for the construction of HPP Skavica.

The MoU acknowledges Bechtel’s unique and expanded experience in designing and implementing innovative engineering solutions as well as the models for the funding of complex projects, according to the statement.

The two parties also expressed interest, in addition to their cooperation in the design and construction, in developing a funding framework that would be acceptable to the Government of Albania.